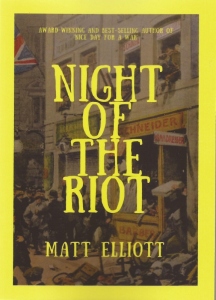 “Did you ever try to do what you thought was the right thing, but ended up getting into big trouble? I did. It was on the night of the riot.”

‘Snow’ Goodison works in Wanganui as an errand boy for German pork butcher, Mr Schmidt. He has a care-free life, enjoying playing football and collecting cigarette cards. But in May 1915, the passenger liner Lusitania is sunk off the coast of Ireland by a German submarine. Shocked by this horror, a group of Wanganui citizens lead a patriotic march to Mr Schmidt’s shop. It is attacked and looted. Snow was seen outside the shop during the trouble and is accused of being involved in the riot. Would he do such a thing?

Based on an actual event, Night of the Riot is the riveting story of a 14-year old boy learning about his place in the world and standing up for what he thinks is right.

‘The earnest, upbeat tone of the text will hook young readers in. The book itself is physically on the small side, with large font, making it a very accessible text. Reluctant readers will really enjoy reading this as the pages and chapters fly by in a whimsical blur. I have no doubt that anybody reading the opening will go on to read the entire text.’ – Ian Stewart, (HOD English, St. Peter’s College, Palmerston North) for the NZ Book Council’s School Library

‘…a valuable account of town life at the start of World War I that will be enjoyed by readers who like New Zealand historical stories. Recommended for Intermediate age readers.’ – Magpies, Volume 33, Issue No.2, May 2018

Review by Whanganui Intermediate student, 12-year-old Calum Sinclair:
‘Night of the Riot is very interesting and it definitely makes for a different reading experience when you know the area in which it’s set well. Also discovering it was based on a true story gave me a shock as I never knew that the sinking of the Lusitania had quite such an effect on Whanganui and its people. I particularly enjoyed learning some of the history involved and whenever I go down Victoria Ave I try to guess where Mr Schmidt’s shop stood. In all, I really liked Night of the Riot and I would absolutely recommend it.’

Night of the Riot is included in Joan Rosier-Jones’ new book, Literary Whanganui: a Reader’s Guide. The site of Heinold’s pork butchery is the first stop on the City Walk literary tour.

‘It was so riveting that I could not put the book down, I just had to continue. This is a brilliant story packed with creative imagination. It weaves historical events into interesting and informative children’s fiction which, I believe, will enhance the story’s reading appeal to boys. The educational aspect of including historical details of riots and cultural issues (to name a few) which occurred 100 years ago displays themes that are relevant to our multicultural New Zealand society of 2017. This is thought provoking fiction for young readers.’ – Andrea Nixon, Senior Librarian, Children’s and Youth Services, Auckland Libraries

‘..a fascinating outline of life in small town New Zealand before and during WW1.’ Read the review by Bob Doherty of Bob’s Books 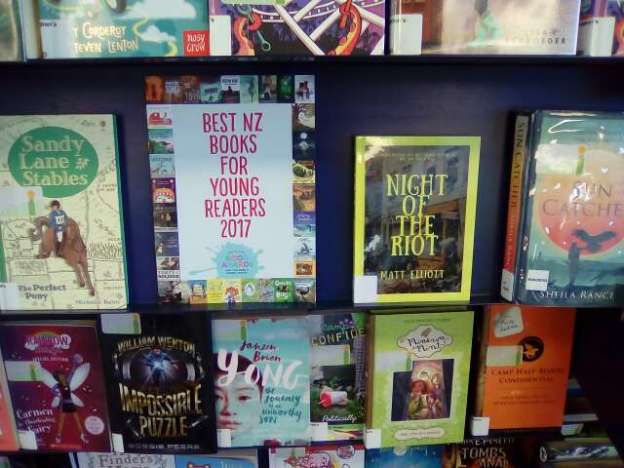 Spotted in an Auckland library